Before I get hammered by the checking vs testing advocates, please let me caveat this post by saying that this entire post is about automated checking, but for readability purposes I may from time to time use the words test or testing when I actually mean check or checking. If you’re offended by this, please feel free to mentally substitute the words as you read. Anyway, back to my story…

Over the past year I’ve been building a number of standalone test utilities, designed to centralise some common features I encountered when reviewing different team’s automation frameworks. These utilities exist in their own independent Git repositories and are shared as NuGet packages. As an example, one framework deals with CRUD operations on test users, allowing consumers to quickly and easily create test user accounts with randomised test data, as well as being able to tear them down afterwards.

After distributing v1 of the first package I opened up the repository to everyone in the organisation and encouraged them to contribute new features and bug fixes. After a few weeks, teams from across the department had begun consuming the package and much to my amazement some had even contributed back to the code base. I was delighted, not only were lots of people benefiting from my work, but they were also helping to make the package better for themselves and everyone else – “amazing, cross-team collaboration” I thought to myself.

Fast forward a few months, another tester suggests a new feature for the package. Later that week I pull down the latest changes and get to work. Much to my dismay I find a web of poorly written code, hard-coded values and newly introduced bugs – “Argh, but this was perfect when I left it!”.

I shouldn’t have been surprised, but I was. I’d left the door open and the keys in the ignition yet I was still shocked when I found that someone had wrapped it round a tree!

Quickly I got to work adding acceptance tests and hooking them up to the CI build in TeamCity. Testing a test framework seemed overkill, but they provided a way of regression testing the main features of the package after myself or other made changes and would help prevent others from introducing breaking changes. This worked well and things started to improve. Adding acceptance tests turned out to be a good idea and because they were written in Gherkin syntax they also had the helpful side-effects of documenting the features of the package and providing sample implementation code for others to follow when consuming it. WIN!

However, I was still facing the challenge of people failing to follow the kind of good engineering practices I had tried to employ while designing the original framework – KISS, DRY, YAGNI, SOLID etc.

I began adding unit tests to the public methods and refactoring as I went. At first I thought this would be a long winded and painful exercise, but actually, thanks to the suite of acceptance tests I was able to perform some aggressive refactors relatively quickly and could run the ATs to check I hadn’t broken the overall behaviour.

Today this framework, and the others that have followed, are in regular use by lots of team, coding standards remain high and bugs are rare. I still keep a keen eye on the code to ensure people are adding tests as they go and I offer code reviews when more junior team members need a helping hand, but all in all things are looking good and new teams are regularly adopting the packages. 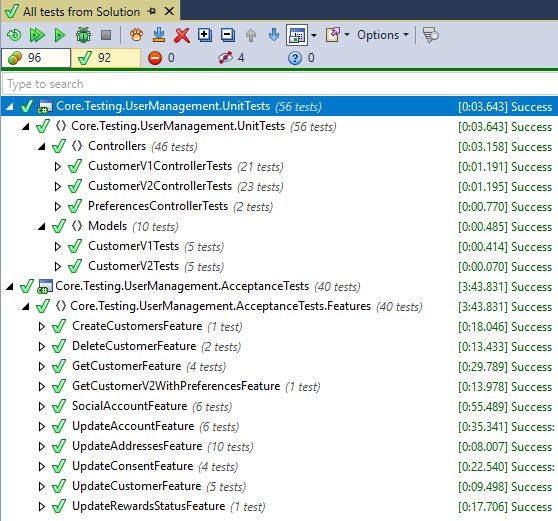 Having automated tests and CI for your common test utilities and frameworks can be a great thing. Not only do they help to keep the quality high and prevent new bugs from being introduced, I also found that they can have a number of other benefits: